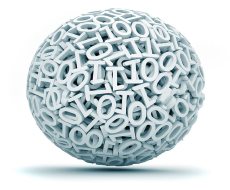 Binary code works by representing content (letters, symbols, colors) in a form that computers can understand. This is done by breaking the content down into a numeric system of two digits 0 and 1. To accomplish this, computers use electrical impulses switching OFF and ON to represent these two digit numbers. This can be better understood by understanding how a computer chip works.

A computer chip is made of millions of transistors that act as switches much like a light bulb in your home. If you want light you move the switch to ON to allow electricity to flow through the light bulb thus giving you light, but if you switch back to OFF the light goes away because the electrical signal is interrupted. The switching behavior from a computer chip is similar in the sense that it can only understand two results, ON and OFF. These results correspond well with the two digits numeric system of 1 and 0 best described as binary (1 representing ON and 0 representing OFF).

If you can guess what the above zeros and ones mean, then congratulations! If not, here is the answer: it is this page title  Understanding Binary Code. Every set of numbers of zeros and ones contain eight characters and each of these sets in the example represent one character (whether a letter or a space).

As you can imagine, we dont use 0s and 1s in our human language as a method of communication. It would take us forever to express ourselves. Computers on the other hand do this in seconds. The faster the computer hardware is, the faster it can perform this binary way of communication.

Did you find this page useful? Leave your comments below.